A Backpack Journalist • May 27, 2018 • https://www.abackpackjournalist.com/aint-you-got-a-right-to-the-tree-of-life/

Ain’t you got a right to the Tree of Life!

1-act. reading from an original script and poetry written by the Inspire Team of Backpackers! 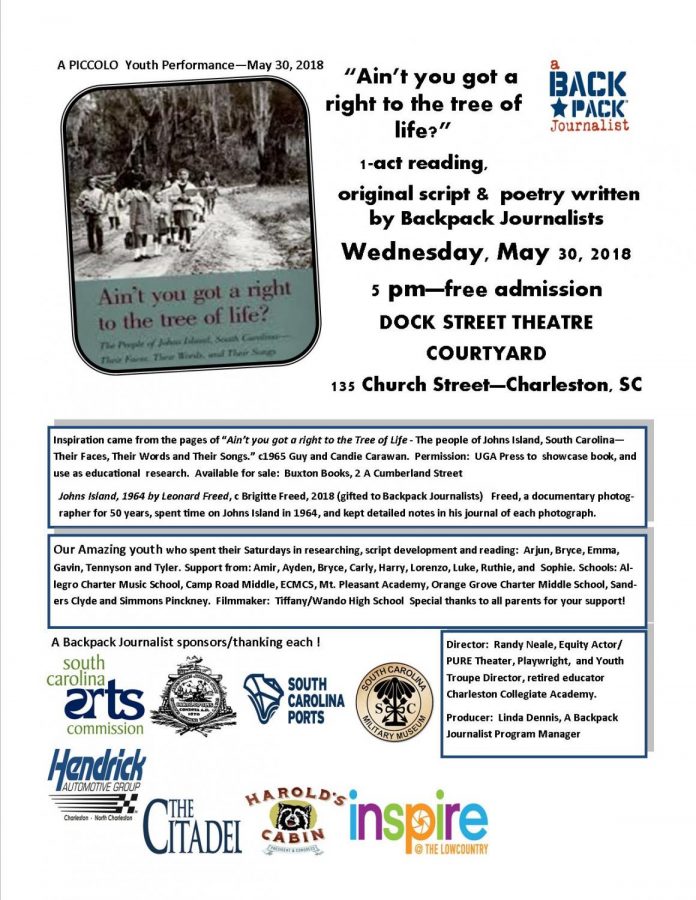 Join us as a team of young backpackers read their l-act, with poetry!  After spending months of reading and research using the celebrated book:  “Ain’t you got a right to the Tree of Life” by Guy and Candie Carawan.

Background of this Historic Book

In 1959, Myles Horton, the director of the Highlander Folk Education School in Tennessee
asked Guy Carawan if he would go to Johns Island, SC to provide transportation for Ms. Septima Clark as she traveled throughout the Sea Islands to teach at the Citizenship Schools that had been developed to help educate African Americans and help secure their right to vote.
Guy had lone been interested in the sea islands and readily agreed to go. Three years later, in 1963, he and Candie moved to Johns Island.
Once there, the Carawan’s  felt that the people and their stories were of great value and needed to be recorded and shared.  Guy invested in a good tape recorder and began  collecting oral histories, songs, stories and memories which would ultimately become the book:  Ain’t you got a right to the Tree of Life. Photographer Robert Yellin joined the Carawans and provided beautiful l images to accompany the stories. We also found photographs by Leonard Freed and they will be on display during the reading.
Septima Clark, Bernice Robinson, Tammy Wine, and Esau Jenkins and many more are included in the collection. This book, a landmark record of the Sea Islands’  rich history during the Civil Rights era, collected by Guy and Candie first published in 1967 and then updated and republished in 1989.