April is National Poetry Month – Create a poem for your pocket! 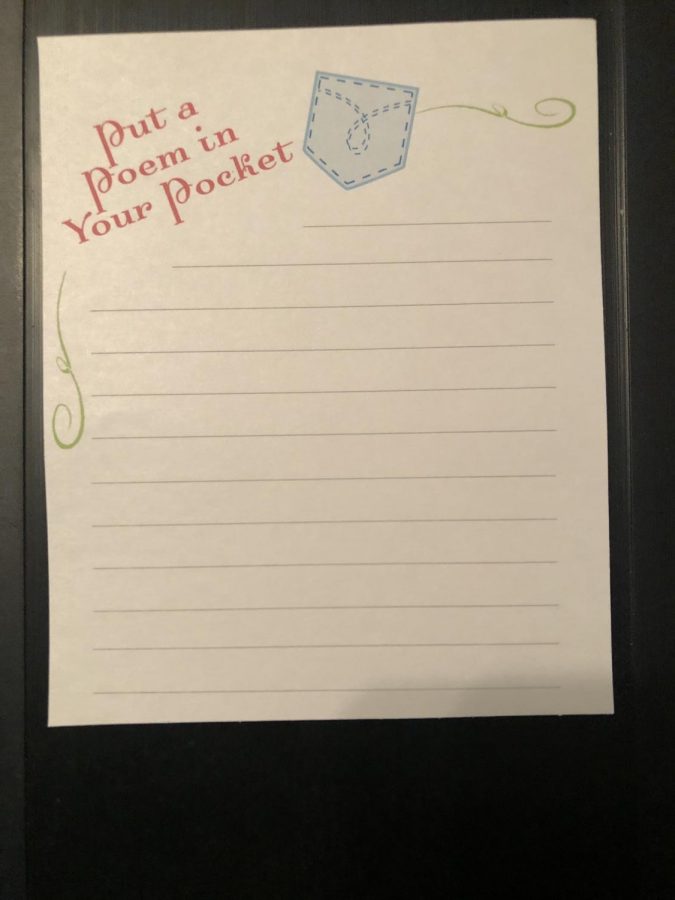 Hello to all!  In our enrichment classes each April we always bring in a fun writing experience!

Let’s celebrate and create a POEM IN MY POCKET!    Each poem you write, make it short and with  meaning.  You may use an index card  and fold in half to fit into your pocket.

We were inspired by Archibald Rutledge, born in South Carolina and from the “Rutledge and Hampton families”.   The Hampton Plantation has in their lobby a display honoring Mr. Rutledge, and  samples of his short “Poems in my Pocket”  All were written in a sentence or two.  Often when he walked in downtown Charleston, he would pass a sample out to his friends walking by.

Rutledge grew up in Georgetown County at Hampton Plantation, built in 1730 on a two-thousand-acre tract secured by his Huguenot ancestor Daniel Horry in 1686. Rutledge claimed that had it not been for his parents’ insistence that he obtain an education, he might never have left the Santee River delta. In 1900 he graduated as salutatorian from Porter Military Academy in Charleston and was subsequently packed off to Union College in Schenectady, New York, where he earned both bachelor’s (1904) and master’s (1907) degrees. For nearly thirty-two years Rutledge headed the English department at Mercersburg Academy, a college preparatory school in south-central Pennsylvania. On December 19, 1907, he married Florence Hart, who died in 1934. She was the mother of his three sons. In 1936 Rutledge married Alice Lucas.Rutledge began publishing poetry in 1907, but he did not earn recognition until 1918, when his memoir of youth, Tom and I on the Old Plantation, was published. While teaching, Rutledge published many books, poems, and articles in national magazines, including the Saturday Evening Post and Good Housekeeping. In 1934 the South Carolina General Assembly named Rutledge the state’s first poet laureate, an honor he held for the remainder of his life.

As the title of his 1918 memoir suggests, Rutledge took life at Hampton as his literary subject, but to his national audience he spoke as the ambassador for an increasingly anachronistic Deep South. When treating the abundant natural beauty and wildlife of the Santee River delta, Rutledge crafted lyrical, engaging prose, but his homespun depictions of “my black henchmen” and their “happy blending with the plantation landscape” reflected what one colleague described as his “unreconstructed views on white supremacy.” Rutledge wore the mantle of planter paternalism, a habit of mind mirrored in his alternate reverence and ridicule of the black men and women he “inherited” at Hampton. Home by the River (1941) and God’s Children (1947) are particularly noteworthy for this tendency, which Rutledge dis- cussed under the rubric of “dusky dilemmas.”

Rutledge retired from Mercersburg Academy in 1937 and returned to Hampton, which he had inherited from his father in 1923. With the help of the plantation’s black laborers, he lovingly restored the house and grounds, which once had played host to Francis Marion and George Washington. Rutledge died on September 15, 1973, at Little Hampton, his home in McClellanville. He is buried with his sons Archibald Jr. and Henry Middleton at Hampton Plantation, which he bequeathed to the state of South Carolina. Located sixteen miles south of Georgetown on U.S. Highway 17, it is open to the public as Hampton Plantation State Historic Site. In 1999, Rutledge was posthumously inducted into the South Carolina Academy of Authors.

Samples of his poems can be found at:

It takes solitude under the stars, for us to be reminded of our eternal origin and our far destiny.